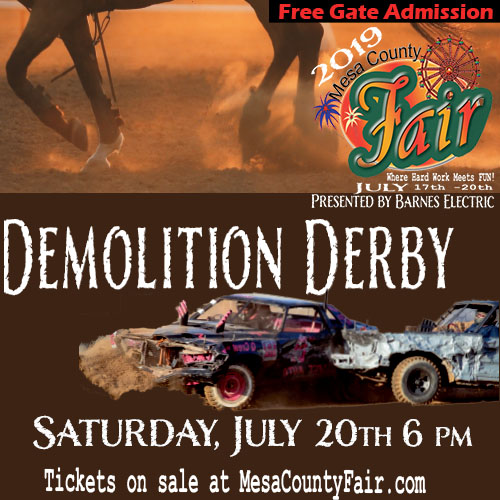 Gold is Gold Buckle Tickets Only


How often are you encouraged to, “HIT EM’ AGAIN!”? This is the one event where you can ram a guy (or gal) as hard as you want, as much as you want, and NOT get a ticket!

This event features a free-for-all style derby held in a mud pit. The car and driver that are the last standing are the WINNER!

Some people run for the prize money, but most of our competitors are in it for the fun and just come for the crash.

You’ll see everything from trucks, station wagons, to a pink 76 Pontiac, dubbed Miss Pink Panther, for the first demolition derby of her life.

During my past Demo Derby experiences, I have personally driven my mom’s wagon, a Subaru, and a tough truck. I’ll NEVER forget ‘Big Sexy’. A Big guy in a BIG station wagon, the kind you rolled around in the back of as a kid (if you’re as old as me). Big Sexy had a bullseye on me from the start and dang near disabled my vehicle on the first hit, but another car deflected the shot and I ended up on the opposite side of the arena from him for most of the event, but eventually everyone was down around us… he had a straight and clear shot from one end of the arena into my once trusty stead, which was sure to land its death shot. As he revved his engine for effect, I tried to break my stick (to show I have given up) but alas the darn thing wouldn’t crack! This was going to hurt-I braced for impact as Big Sexy gunned it across the mud, and all I could see was his smile as he CRUSHED my vehicle and my hopes of a first-time win.

By far the MOST fun you can have driving a car!

Welcome to the New MyNorthTickets!

We’re excited to bring you a brand new experience on MyNorthTickets. We’ve added new features, updated our design and have made the site intuitive and easy to use. If you have any questions, comments or feedback, visit our contact page. We would love to hear from you!